Why the 2021 Wedding Season Is So Busy 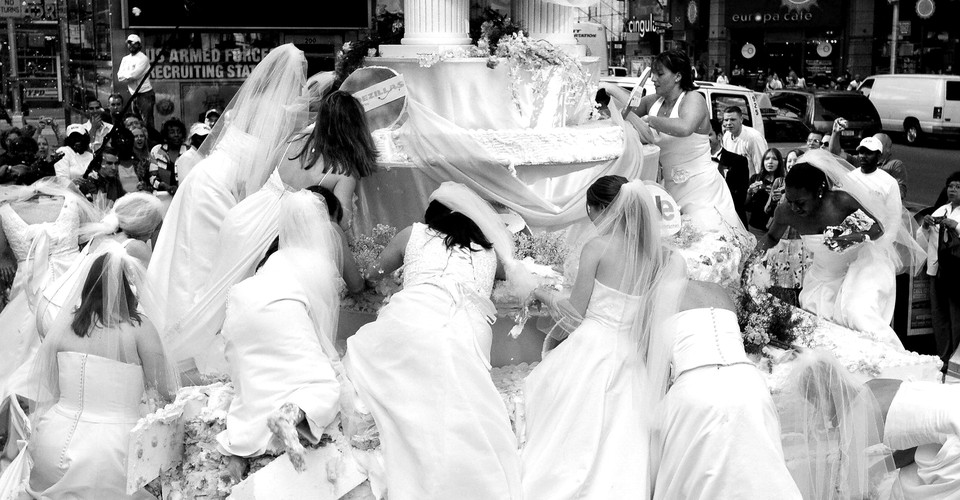 With the promise of a delightfully normal summer in the United States comes the resumption of the summer wedding season. Late spring through early fall is historically the most popular time for couples to get married. This year, however, widespread vaccination in the U.S. and the ensuing easement of gathering restrictions, after more than a year of the coronavirus pandemic, are making for a wedding season of grand proportions.

“It’s two years of weddings in one year,” Stanley Babb, the owner of Stanlo Photography, told me. According to The Knot’s 2020 Real Weddings Study, nearly half of couples with weddings scheduled for last year postponed until 2021. This left newly engaged couples with hopes of walking down the aisle in 2021 to compete with the pandemic postponers for peak-wedding-season dates this year. Along with this rush to the altar comes a returned desire for the wedding industry’s traditional trappings, including large guest counts and lavish cakes. Gone are the days of intimate elopements necessitated by travel bans and capacity restrictions.

Couples also seem to be spending less time engaged. Zola, a wedding-planning and registry website, found in an internal survey that couples in 2021 are getting married much sooner after their engagement this year than they were in 2019, Emily Forrest, the director of communications at Zola, told me. (According to a survey by The Knot in 2019, the average engagement for U.S. couples is 15 months.) As soon as the country’s pandemic outlook began to shift in early spring, Forrest said, couples were enthusiastic about planning their wedding after a year of restlessness and uncertainty. “People are so thrilled to be able to get together with their friends and family members,” she said.

This unprecedented wedding season is packing many social calendars. Jonathan Buckley, a 28-year-old technical account manager who lives in Los Angeles, was invited to five weddings this summer—and three of them are on consecutive weekends in June. “Of course, none of the suits or outfits that I had before quarantine fit the same,” Buckley told me. “So I had to buy a bunch of stuff on ASOS.”

Couples who have postponed their wedding (in some cases more than once) are vying for resources with couples trying to book venues and photographers for the first time, leading to overworked vendors and a sense of competition for couples. One bride-to-be posted on a WeddingWire forum earlier this year expressing frustration at the lack of venue options due to COVID-19-related postponements; a Redditor looking for guidance on when to start booking vendors was advised to begin locking down wedding professionals now for a May 2022 wedding. Among wedding vendors surveyed by Zola, one-third said they were fully booked or overbooked for 2021, and had more events scheduled than in years prior. Of the 25 weddings booked this summer (compared with last year’s four) at The Wilburton, in Manchester Village, Vermont, about half are postponements from 2020, Tajlei Levis, one of the innkeepers, told me. At this point, she said she has acted as a therapist to many nervous and disappointed couples.

As postponements began butting up against new bookings for this summer, Babb, the photographer, hired four new freelancers to help him handle the workload of this season’s 70 weddings. (Usually, he shoots between 30 and 40 weddings a year.) His policy is to book dates on a first-come, first-served basis, regardless of whether the couple postponed or is making a first booking. Babb said he’s also getting requests for more weekday weddings than he used to.

Read: The couples who get married on a weekday

Ashley Beck, the catering sales manager at the Liberty Hotel, in Boston, says her workload has surpassed even the busiest months of 2019. “It is like 10 times as crazy as back in 2019,” Beck told me. October will be the Liberty Hotel’s most hectic month; a wedding is booked for every day of every weekend, many with more than 100 guests in attendance. She received inquiries for June weddings only a month in advance, and told me that as capacity restrictions lifted in May, several couples called looking to bolster their guest list just days before their event. Last year’s layoffs of the hotel’s event staff left Beck overwhelmed and overworked during this sudden influx of weddings, but she’s hoping to have the event-planning team fully staffed again by mid-summer. In the meantime, “I’ve had a few breakdowns,” Beck said.

Many couples who have gotten married during the pandemic have been forced to rethink and scale back their nuptials, and “micro-weddings,” elopements, and Zoom ceremonies gained favor last summer. For all that Zoom weddings have provided families during the crisis, the medium hasn’t made up for the lack of hugs and sweaty dance floors. Even though couples may have gotten legally married in an intimate event last year, for some, the celebration of a marriage doesn’t feel complete without their extended social circles, and they’re choosing to have a belated reception to honor that wish. The pandemic illuminated how weddings could be pared down—and indeed enjoyed despite their small size—but demand for the conventional trappings of the wedding industry, such as big receptions, DJs, and wedding planners, seems to have returned as soon as they became available again.

Stacey Lee, a florist and the owner of Paeonia Designs, is currently working with a handful of couples for the second time, creating arrangements for their large celebrations more than a year after their backyard ceremonies. Lee has also fielded many requests from couples who eloped and are planning a second celebration later this year.

According to another Zola survey, the expenses are adding up for couples who had to reschedule or who are doing an extra ceremony, because they’ve had to print new invitations, say, or pay for a photographer to shoot an elopement last year and a reception this year. “They are making a decision to invest in the wedding of their dreams because they feel like they really want to have that now,” Forrest said. Couples could have decided that, after the long pause of the pandemic and the great slowdown of the wedding industry, they wanted something new from their ceremony. But many couples seem to be taking comfort in partying with as many loved ones as possible. Although this wedding season may be overwhelming for some guests and vendors, it is a symptom of society’s longing to return to normalcy.

Even if Lee, who is nonbinary, is having their busiest wedding season ever, they say they’re relishing the return to work. Clients are excited to finally get married. And Lee is delighted to get to deliver flowers to brides once again. “I can’t tell you how good it felt this past Saturday to hand a bride a bouquet,” Lee said. “She was crying; I’m crying behind my mask. I waited months to do that.”